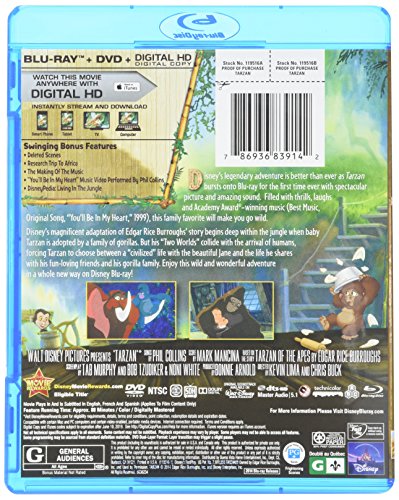 Disney’s legendary adventure is better than ever as TARZAN bursts onto Blu-ray for the first time ever with spectacular picture and amazing sound. Filled with thrills, laughs, and Academy Award(R)-winning music (Best Music, Original Song, “You’ll Be In My Heart,” 1999), this family favorite will make you go wild. Disney’s magnificent adaptation of Edgar Rice Burroughs’ story begins deep within the jungle when baby Tarzan is adopted by a family of gorillas. But his “Two Worlds” collide with the arrival of humans, forcing Tarzan to choose between a “civilized” life with the beautiful Jane and the life he shares with his fun-loving friends and his gorilla family. Enjoy this wild and wonderful adventure in a whole new way on Disney Blu-ray!|With 47 previous movie adaptations, TARZAN(R) is said to be the second most-filmed subject in Hollywood history (topped only by DRACULA) and one of the all-time most popular with moviegoers.|To help prepare them for the film, the directors and a group of artistic supervisors set out on an African safari in March 1996, touring the animal reserves in Kenya, visiting the mountain gorillas in Uganda, and observing Bwindi’s Impenetrable Forest.|The city of Tarzana is named after “Tarzan” author Edgar Rice Burroughs’ 550-acre Tarzana Ranch, which he later sold to housing developers.|Reportedly, Burroughs was never satisfied with the various screen versions of his book, but according his grandson Danton Burroughs, the Disney version would have pleased his grandfather.